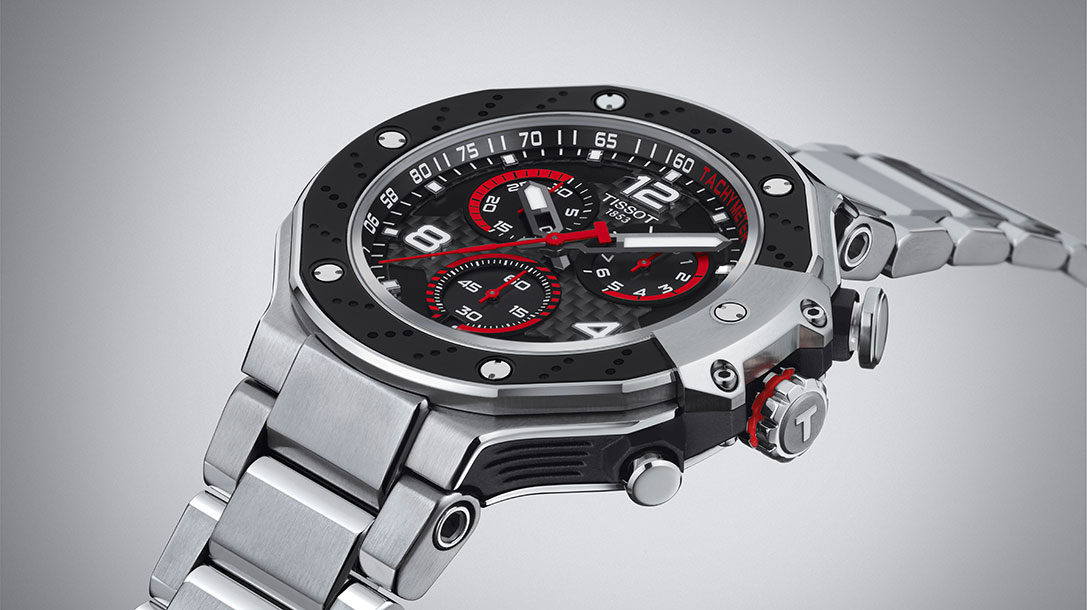 THE RACE, EVER IN THE LEAD

Since 2001, the brand has served as the official timekeeper of the World Motorcycle Grand Prix Championship. Each year, as with the 2022 models, there are editions inspired by this competition.

For thrill and speed seekers, Tissot once again treats two-wheeled racing enthusiasts to three new models. The T-Race MotoGP Automatic stands apart from the rest thanks to its mechanical personality, highlighted by its aesthetic features. Accordingly, this series, limited to 3,333 examples, combines a 45mm steel case with a black PVD coating with a stylized bezel echoing the grooves on racing tires. A protection designed like a brake disc houses the crown.

The chronograph counters with their red hands are arranged on the structured dial in a somber scenography. This same color dresses the swift second hand. The contrast achieved thereby energizes the composition. For optimal clarity, the numerals and hour and minute hands are coated with Super-Luminova®. The watch is powered by an automatic caliber with a 45-hour power reserve, whose decorated oscillating weight is visible through the sapphire back. This model is fitted with a perforated leather wristband with a sporty look. The T-Race Moto GP Quartz and T-Race Marc Márquez, produced in 8,000 and 3,993 pieces respectively, feature a quartz movement, integrated in an identical case of the same diameter. They both are equipped with a metal wristband. However, they differ from each other in terms of their dials. The first one has a sporty layout accentuated by a carbon design. The second one carries the colors of the Spanish world champion. Irrespective of the model, each comes with its own helmet-shaped case.

Other articles about Tissot