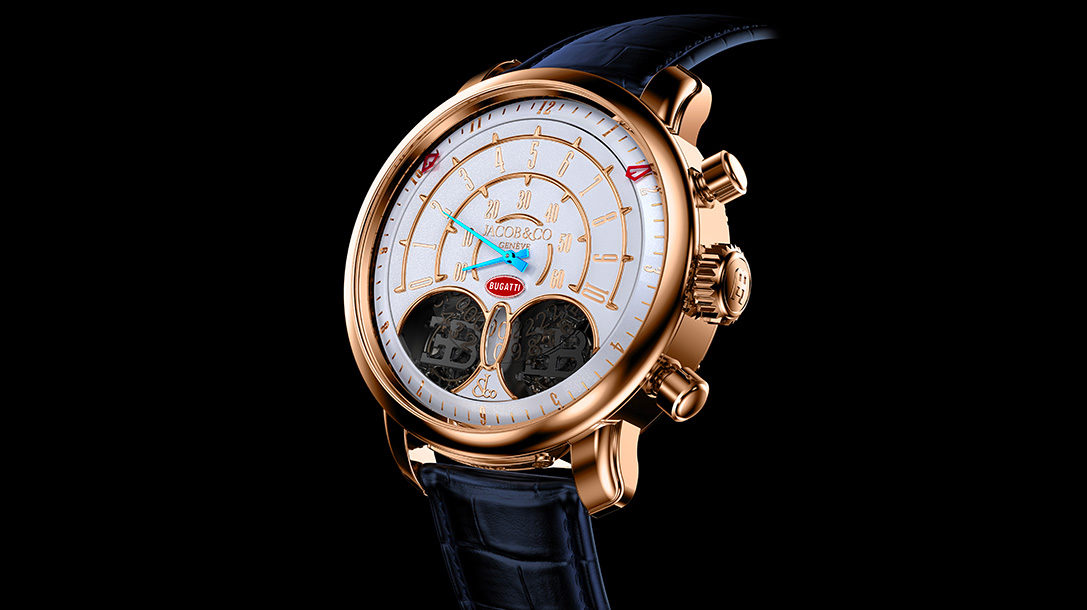 This second opus solidifying the partnership between Jacob & Co and Bugatti began in 2019 honoring the frenetic creativity of the eponymous engineer and designer, son of Ettore.

Amaze. Jacob & Co are masters of their craft. From its extravagant world emerged the exceptional Twin Turbo designed in the likeness of a Bugatti Chiron with its superlative performance. This year, the luxury watch brand unveils a new, atypical creation, limited to 57 timepieces per version. This is brought to life in the form of the Jean Bugatti, a chronograph of classic appearance, yet highly original in more ways than one. While there are two piston-shaped pushbuttons on the case middle, on the blue or cream dial side, there is no counter to totalize the measured split times. This function is carried out with the help of a pair of central retrograde hands. The larger one points to the tenth of a second, while the smaller one indicates the increment of the seconds. Minutes are measured via a jumping display on a sapphire disk located between the two apertures in which two 1-minute flying tourbillons rotate. As for the hours and minutes, they are marked by two discreet red indicators appearing above the minute track.

To precisely drive and coordinate this data, the watchmakers developed a hand-wound caliber with a 48-hour power reserve, assembled using 470 components. In order to optimize the chronograph’s performance, it is powered by a separate cylinder and a regulator set at 36,000 vibrations per hour. The movement is incorporated in a 46mm diameter case, machined in either pink or white gold. You only have to turn it over to appreciate all the complexity of the mechanism seen through the sapphire back. Among other things, you can observe the regulating components and the bridges that are all round like those of the famous Bugatti.

Other articles about Jacob & Co