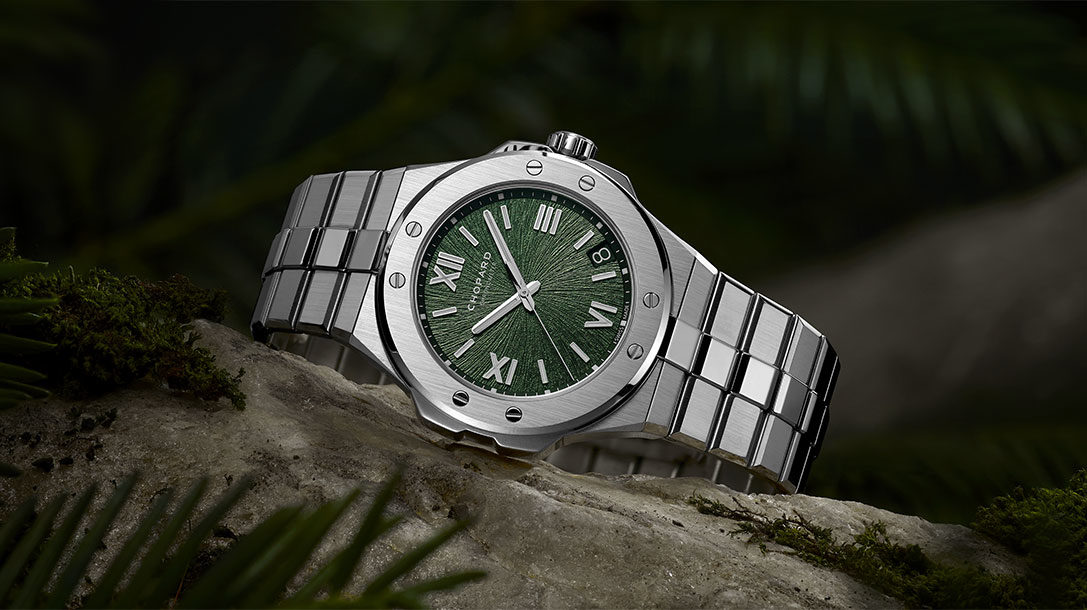 Two new references expand the collection, elaborated with watches bearing a sporty chic look. They stand out thanks to their features associated with the biodiversity of the Alps.

Reinforcing its distinctive qualities. Developing a dedicated design contributes to this objective. At Chopard, this also involves perfecting colors of a precise tone. Thus, after Aletsch Blue and Bernina Grey, the manufacturer is unveiling Pine Green, obtained through a galvanic treatment. The latter is used on the dials of two new Alpine Eagle watches fitted with a 41mm-diameter case that is water-resistant to a depth of 100 meters. In addition, one finds the finish specific to the collection, inspired by the iris of an eagle eye, giving depth to the scenography on which the hour and minute hands are set for a tour of hours composed of Roman numerals and markers.

Two versions are suggested. One is made of Lucent Steel A223, an exclusive metal made of 70% recycled material that is more resistant than conventional steel. The second variation features a rose gold case. Both share wristbands assembled from links machined from the same metals. This duo is powered by the 01.01-C self-winding movement equipped with a 60-hour power reserve. With its performance and precision, this 207-piece caliber is certified chronometer by the Official Swiss Chronometer Testing Institute (COSC). Of note, a portion of the sales of the Alpine Eagle 41mm Pine Green will be donated to the Alpine Eagle Foundation to raise awareness, mobilize, and act toward preserving the alpine environment and its biodiversity founded by Karl-Friedrich Scheufele, Jacques-Olivier Travers, and Ronald Menzel.

Other articles about Chopard