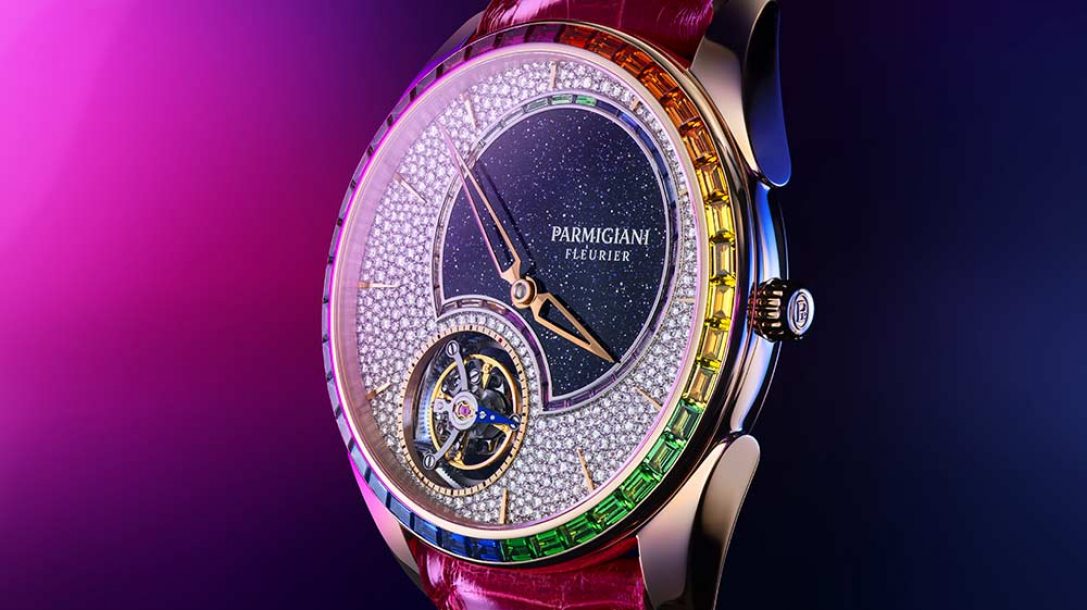 AT THE END OF THE RAINBOW

The Fleurier-based watchmaker unveils a flamboyant new creation hosting a flying tourbillon and center staging not just one but two rainbows of precious stones. 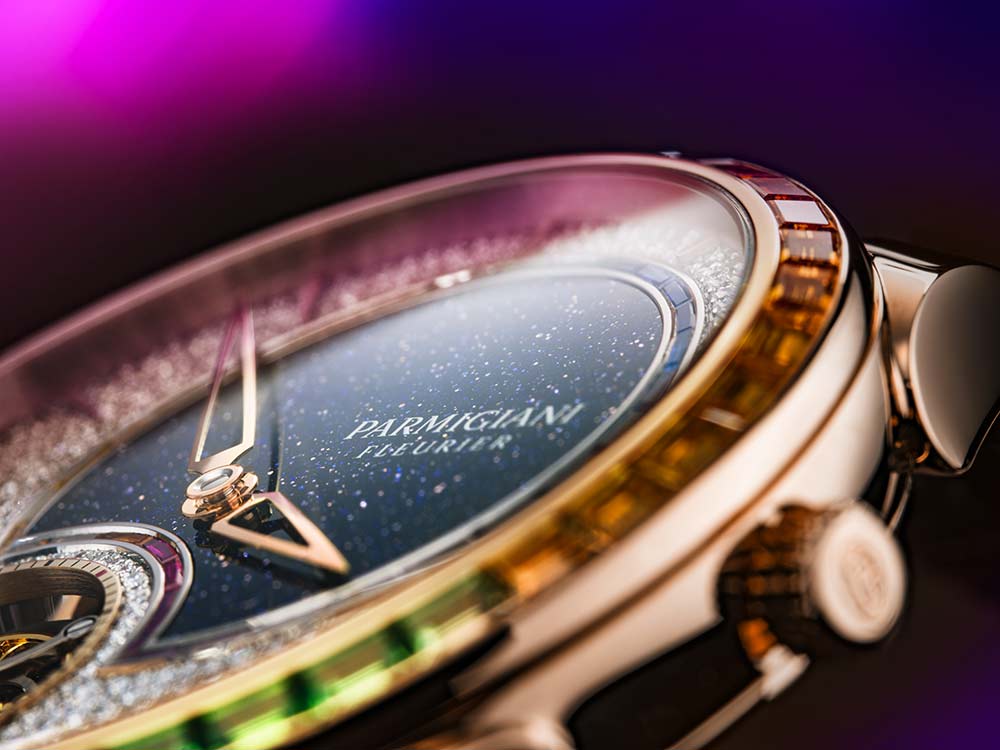 Although unicorns have been calling the trend shots over the last few years, rainbows on the other hand have been popular since time immemorial. Legend has it that at the end of this fascinating optical phenomenon, which symbolizes joy and merriment, there’s a pot filled with gold. Even if this belief is based on fantasy, a rainbow is still a magical sight to behold. Following in this talisman’s footsteps, Parmigiani’s Tonda 1950 Tourbillon Double Rainbow watch adorns not just one but two photometeors, one reproducing the classical color scheme and the other presenting a reverse layout. 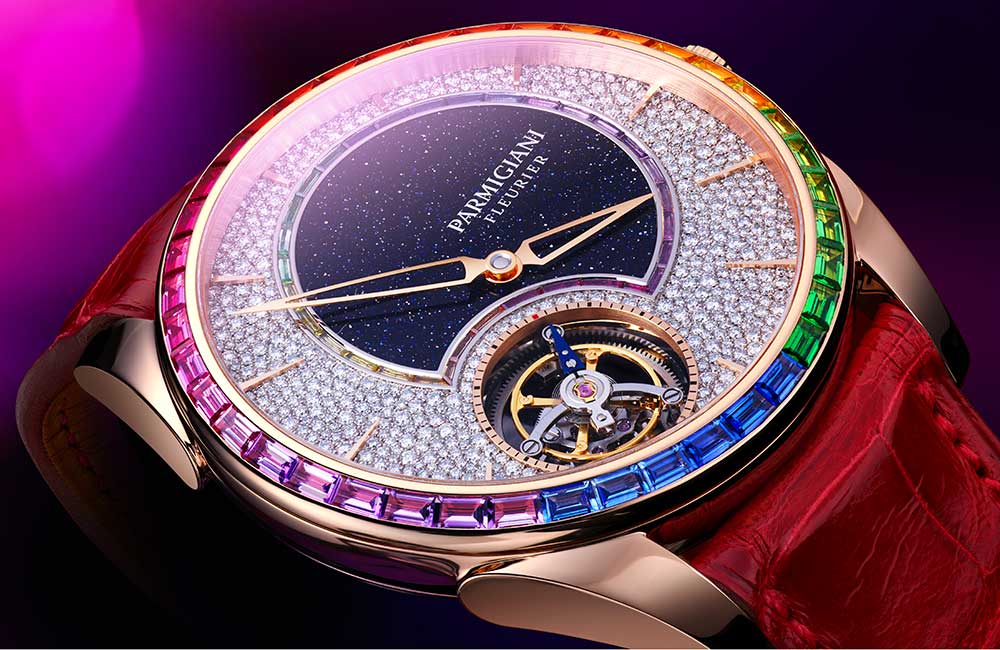 This timepiece’s dazzling white-gold face is strewn with brilliant-cut diamonds of different sizes, added using the snow-set technique, i.e. some 573 gems totaling 1,402 carats. Like a scintillating bubble, the aventurine-fashioned dial, off-centered towards 2 o’clock, conjures up a starlit sky encircled by a rainbow of 31 baguette-cut colored stones. In sum, 4 rubies, 3 orange and 5 yellow sapphires, 5 tsavorites, 5 blue sapphires, 4 amethysts and 5 pink sapphires totaling 0.31 carats. A cut-out at the bottom of this large navy-blue orbit harmoniously embraces the aperture which reveals the 60-second flying tourbillon. At the center of this enchanting scenescape, the two skeleton delta-shaped hour and minute hands hover over elongated indexes. 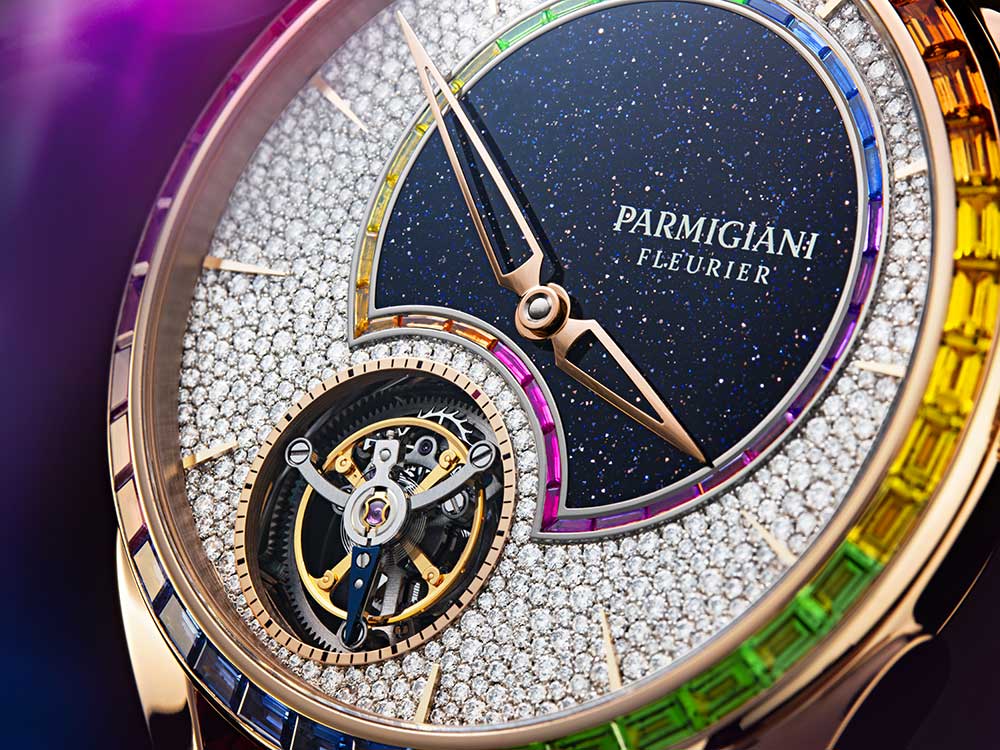 These displays are powered by the PF517 caliber, an ultra-slim self-winding movement set at 3 Hz, delivering a 48-hour power reserve and nestling in a rose-gold case. This case, measuring 40.20 mm in diameter and 9.43 mm thick, is topped with a second rainbow boasting 40 colored gems (2.50 carats), once again baguette-cut. A fabulous marriage which unites 6 blue sapphires, 6 amethysts, 5 pink sapphires, 4 rubies, 6 orange and 6 yellow sapphires, and 7 tsavorites.

Parmigiani’s Tonda 1950 Tourbillon Double Rainbow is complemented by a Hermès-designed red alligator strap and clasped by a rose-gold ardillon buckle.

Other articles about Parmigiani Fleurier