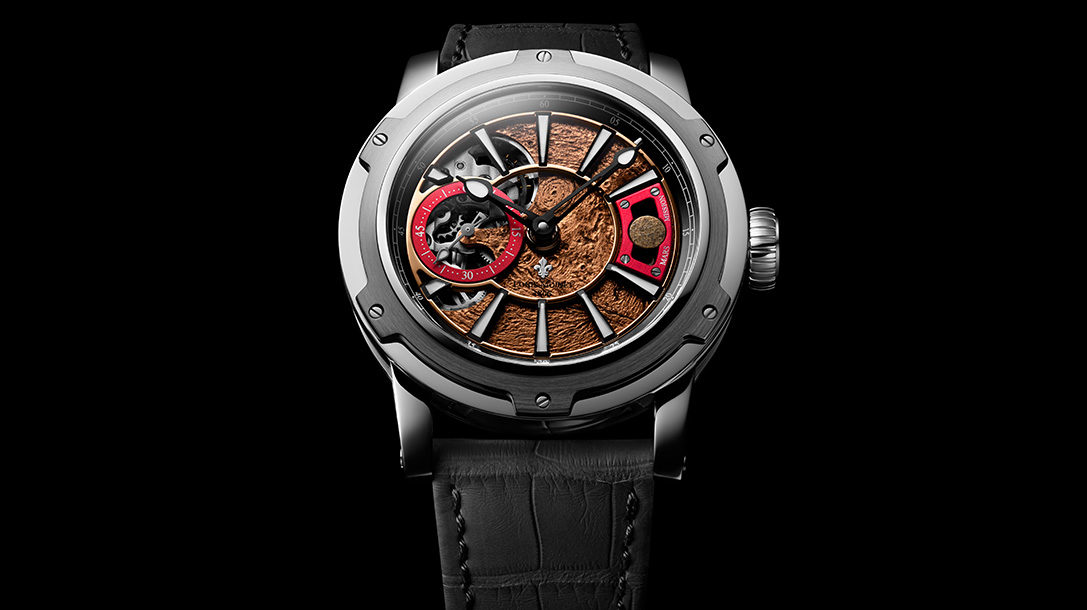 The Mars model by Louis Moinet offers us a maiden voyage to the red planet. With this exceptional timepiece, the exploration of its surface can begin.

Long before the spectacular Perseverance robot, NASA first sent up Mariner 4 in 1964. For the first time, this probe performed a flyby of the fourth planet of the solar system. During this sidereal journey, it took the first images of the Martian soil in 1965. Based on these highly accurate pictures, the dial of the Mars Mission watch by Louis Moinet was designed. This series continues the aesthetics of the Super Moon presented at the beginning of the year. To ensure the most faithful reproduction, a hand hammering technique gives the desired texture. A patina adds shadow and light, and a copper plating creates a warm, red soil-like tone. At 3 o’clock, a round shaped disc integrates a real fragment from a meteorite that escaped from our cosmic neighbor, arriving millions of years later in the Omani desert. For a balanced visual harmony, in symmetry, a small off-center seconds at 9 o’clock enlivens this original composition with its gyrations.

The LM45 caliber beats within the large 45.4mm diameter steel case. This self-winding movement provides 48 hours of power reserve to the pair of hour and minute hands. The presence of a sapphire case back enables an appreciation of the finishing touches on the oscillating weight: a Clou de Paris motif and a lily of the valley. Each of the 100 examples of the Mars Mission watch is worn on a Louisiana alligator leather wristband closed by a folding clasp. The perfect way to continue the space adventure in safety and style!

Other articles about Louis Moinet