The young watchmaker from Nyon is celebrating its 40th anniversary this year, i.e. four decades of technical and (super) creative design innovation, and pays tribute to its first loves by unveiling a trio of watches inspired by the first Hublot.

1980 was the year life was infused into a watch whose name would subsequently be used to baptize a new brand: Hublot, because its rounded silhouette interspersed with twelve titanium screws definitely conjures up the little porthole of sailing vessels. Yet, what stood out most on this piece, which was avant-garde for its time, was the unprecedented combination of materials it boasted, a blend of yellow gold for its case and black rubber for its strap. 40 years on, to mark its anniversary, the manufacture which is established in Nyon, between Geneva and Lausanne, rolls out a triptych of Classic Fusion 40 years anniversary limited editions inspired by the original watch.

Each piece hosts a 45mm-diameter case, waterproof to a depth of 100 meters, and fashioned in a different material: yellow gold (100 pieces), black ceramic and titanium (200 pieces for each version). The bezel, adorned with a pair of black lugs at 3 o’clock and 6 o’clock, is punctuated with six flat-head “H” screws imagined as indexes. The intense-black-lacquered dial is hovered over by two baton-style hands for the hours and minutes as well as a direct-drive whose counterpoise reiterates Hublot’s logo; all three are golden or silvered based on the version chosen.

The Classic Fusion 40 years anniversary houses the HUB1112 caliber, an automatic movement beating at 4 Hz and delivering a power reserve of 42 hours once fully wound, and is, only naturally, worn on a smooth black rubber strap attached by a folding clasp forged in the same material as the case. 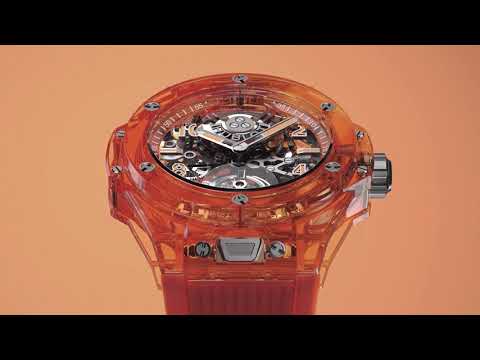