WHERE WORLDS WEAVE TOGETHER

Symmetric scenography, a sapphire-crystal dome, outstanding finishes, it sounds pretty familiar, don’t you think? Yet, for this festive limited series, a detail makes all the difference! Explanations.

Back in 2007, MB&F made its mark with its Horological Machines combining futuristic design and an extreme caliber. Then Legacy Machines arrived on the scene, firstly with the rather-more classically-shaped LM 1 in 2011. What’s so special about them? They’re round watches which pay a glowing tribute to watchmaking tradition and highlight engineering dial-side by center staging a technical-signature large suspended balance-wheel. To celebrate this collection’s 10th anniversary, the Geneva-based brand has just rolled out its LM X, which perfectly sums up this one-of-a-kind style and mindset, inborn for Max Büsser and his can’t-do-without friends, based on performance.

It goes without saying, the large regulating device obviously reigns supreme in the middle of this scenescape. Two time zones are displayed on two separate tilted discs. The crown, placed at 10 o’clock, is used to set one of them, whilst a second crown at 2 adjusts the other. Yet, something novel catches the eye. Pride of place in this stunning scene is given to: an original indicator which shows how much of the impressive seven-day power reserve is left! The owner of this timepiece can choose to display the energy left by the number of days counted down from 7 to 0, or by the weekday with the first letter of the day in English.

The hand-wound movement, with its three viewable barrels placed on either side of the watch, nestles in a 44 mm-diameter case. Two limited series are available. The LM X RG, issued in 18 pieces, combines a rose gold case with bridges and discs coated with black NAC. The other, the LM X TI, rolled out in 33 pieces, blends titanium and a green CVD finish. 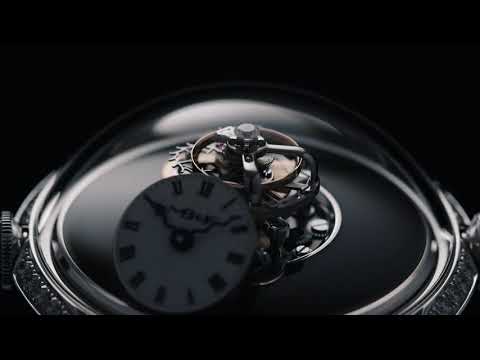