The Legacy Machine N°2, the latest opus from the hyper-creative Geneva brand, bathes its three-dimensional dial in a beautiful purple colour that not only catches the light but also the attention.

The Legacy Machine N°2 (LM2 for the fans) was first launched in 2013 and was an instant success. Unlike the highly architectural watches MB&F usually designs, and more striking visually than its predecessor, the Legacy Machine N°1, released in 2011, the LM2 immediately attracted and even hypnotised customers, journalists and aficionados. Because under the sapphire dome, like a glass bubble, lay a whole world of technique and beauty. But even the most beautiful story must have an end, and this story concludes with the Legacy Machine N°2 White Gold Purple. The watch limited to just 12 pieces is the last in the series.

To launch this grande finale, MB&F has chosen purple, a colour made by mixing red and blue, and highly symbolic in certain cultures. It is at the very end of the spectrum that can be seen by the human eye, just before the ultraviolet frequencies, which are invisible. The dial on this new LM2 is made of platinum and has been finely engraved with rays in a spiral, like an iris, before being coloured purple using a CVD (Chemical Vapour Deposition) treatment. The result is an even colour that changes according to the light, playing with the nuances, going from a deep purple to a moiré magenta. Under the constant ballet of the two “flying” balance wheels, a small dial, chamfered with white gold and coated with white lacquer, at 12 o’clock, displays the hours and minutes with the help of two blued gold hands and Roman numerals lacquered in black. At 6 o’clock is the planetary differential, the real conductor of the watch.

Inside the 44mm-wide white gold case is a hand-wound movement running at a relaxed rhythm of 2.5hz (18,800 vibrations an hour) and providing a power reserve of 45 hours. 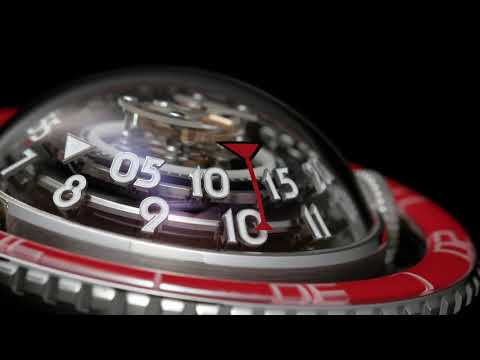