This new chronograph, inspired by the historic bond which exists between the development of aviation and the brand from Saint-Imier, takes on a titanium silhouette and a face that’s as blue as the heavens.

Since the beginning of the 20th century when aviation was taking its first baby steps forwards, Longines has always accompanied the most foolhardy to adventure across the sky and open unprecedented routes through the clouds. This precious support led to the creation of a powerful historic bond between the world of pilots and that of the brand from Saint-Imier which pursues its route today with the arrival of the new Avigation BigEye, worthy successor to the first pilot watches whose vintage look it embraces.

Its 41 mm-diameter case is crafted in titanium, an anti-allergenic material acclaimed for its robustness and for its lightness, and set off with two piston-style pushers. It boasts a solid screwed caseback which centre stages an engraved silhouette of an aircraft on a backdrop dazzling like the sun, and hosts the L688 caliber. This automatic movement incorporates a silicon balance-spring to ensure optimal accuracy, resistance and longer lifespan, beats at a standard frequency of 4 Hz and delivers a power reserve of 54 hours.

On its smoked-effect peacock-blue dial, vanilla Super-LumiNova® adorns thick Arabic numerals and two blackened baton-type hands displaying the hours and minutes. As for the running seconds, they feature in a black snailed counter at 9 o’clock. A silvered central direct-drive with a droplet counterpoise measures short-cycle time where the minutes are totalized in an XL counter (the famous BigEye) at 3 o’clock and the hours at 6 o’clock.

This new Longines is worn on a natural-colored leather strap decorated with ecru stitching beside the lugs and is clasped by a titanium buckle. 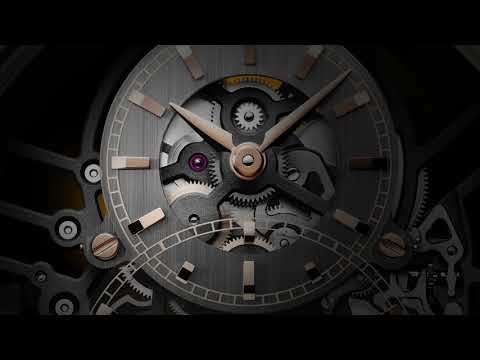